BATHURST: Women who are victims of violence in the Chaleur region no longer have round-the-clock access to Passage House, a shelter for abused women.

According to the union that represents employees at the Passage transition house in Bathurst (CUPE Local 4229), the house’s management decided to cut services, claiming a lack of funding.

“Women in situations of family violence could well go to Passage House and find the door locked,” said Vicky Smith, union representative for the Canadian Union of Public Employees.

“Unfortunately, this is what could happen since the board of directors has decided to reduce the hours of service when there are no residents in the house. This means that a woman in distress runs a very real risk of finding the shelter closed or if she calls of having to leave a message on an answering machine.”

“We don’t know if the reduction in working hours is a negotiating tactic on the part of the employer or if the financial difficulties raised are legitimate, because management refuses to share the financial statements with us,” Smith said.

“We believe that the house’s management has to be transparent, because the operating budget comes from the province. There should be no secrets when a group receives most of its funding from the government.” The transition house annually receives more than $200,000 from the Social Development Department. This is in addition to amounts raised through fundraising activities.

“The management of Passage House wants employees to be on call and work only when there are women at the house,” Smith said. “But Passage House does more than just offer shelter to women in need; it also offers a phone intervention service. For example, in 2011, the house provided shelter to 40 people and employees received 2,500 calls. Some women do not want to leave the family home or move to the transition house; they access the resources by phone.”

“Women living in such situations need to be able to access services at all times. We take issue with the fact that women in need in the Chaleur region are being held hostage during this round of negotiations.”

Ms. Smith explained that the union has filed an official complaint with the Labour and Employment Board against Passage House for having failed in its obligation to negotiate in good faith under article107.1 of the Industrial Relations Acts. The union also filed a complaint under article 35 of the Act because the employer changed the conditions of employment. The union filed two grievances for the layoff of two employees.

The employment contract for union local 4228 expired in December 2012. 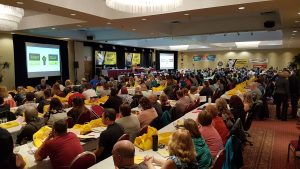