Edmundston – CUPE members were pleased to hear Premier Gallant recognize the importance of the labour movement in his New Brunswick Day speech in Edmundston. Gallant emphasized the valuable contribution of public sector workers to the province. 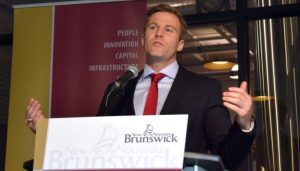 “It was certainly uplifting to hear Gallant thanking NB workers and mention the labour movement’s dedication to make New Brunswick a better place,” said Daniel Légère, CUPE NB President. “The event’s organizers did an excellent job good job, union members and citizens were well received, the event was a success,” he added.

In his speech, Premier Gallant added a special thank you to the front-line workers delivering services at the Edmundston regional hospital.

However, Gallant has yet to change his position on the Sodexo deal, since his own Health minister declared in late June that he was still going forward with the contracting-out plan, which will put over 280 health workers out of a job.

“The same front-line workers who were thanked on NB day are hoping the Premier’s acts be in coherence with his words: he must stop the Sodexo deal,” said Légère.