Fifty-one years ago, the Stonewall riots happened. Two racialized transwomen, Marsha Johnson and Sylvia Rivera, led the riots which energized the fight for equality.  With Pride Month, CUPE NB celebrates the resilience and activism of our LGBTQ2+ members and allies. 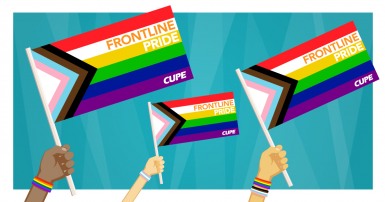 Today, Black, Indigenous and racialized LGBTQ2+ activists are spearheading the most radical cross-movement struggles since Stonewall, around the globe. More than ever, we need a “Frontline Pride” in our province, putting forward the fight to dismantle the homophobic, transphobic, white supremacist, colonial and ableist systems.

“Intersectionality” is a word that must resonate in our province as much as “Solidarity”. For 2020, CUPE is using the Progress Pride Flag to highlight how racism, transphobia and homophobia operate together, and how activists at those intersections have led the resistance.

We cannot forget that Pride is political. Employers and governments try to co-opt Pride, but CUPE is part of the loud chorus for Queer Liberation, Not Rainbow Capitalism – a call that is made only more urgent by COVID-19.

The CUPE NB Executive Board is pleased to announce that we will be holding a a Virtual Convention in April 2021. Because of COVID-19, the dates are still tentative at the moment. More details to come.   DATE:  April 21-24th, 2020 TIME:  Commencing at 9:00 a.m. – a link will be provided to participate in Virtual Convention. LOGISTICS OF THE ... END_OF_DOCUMENT_TOKEN_TO_BE_REPLACED
View Calendar
Add
My Tweets