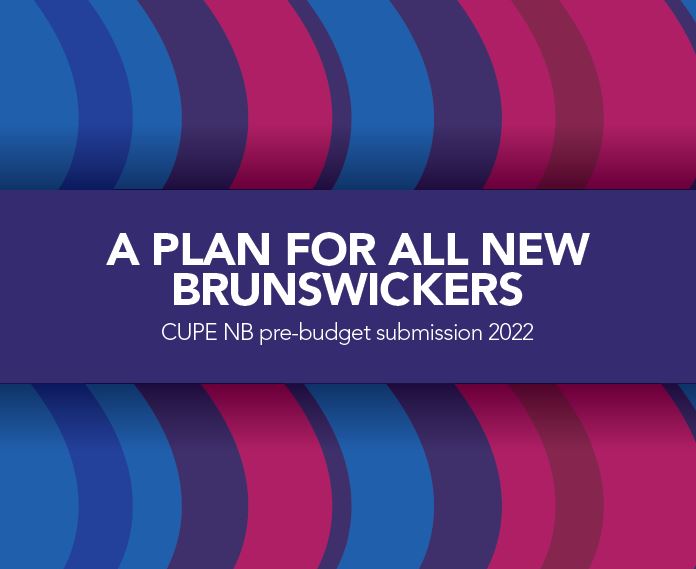 A Plan for All New Brunswickers

INVEST IN PEOPLE – A PUBLIC-FOCUSED RECOVERY

There is an opportunity to make New Brunswick better as we consider the impacts of COVID-19 on our province. New Brunswickers know that life was hard before the pandemic. It only got harder as the disease overwhelmed public services that have been constantly under-funded by consecutive governments.

As the government sits on a projected $487 million dollar surplus, it’s time to invest in the province’s most precious resource: its people.

A community is only as strong as the people that make it up, and people are struggling. Homelessness, poverty and declining mental health are all on the rise.

Single New Brunswickers who receive social assistance live on 39% less than the measure of poverty for New Brunswick. Between January 2021 and January 2022, the price of food in New Brunswick has increased by 6.1%, and the cost of shelter has risen by 5.7%.

CUPE NB believes we can build a province where every New Brunswicker lives in dignity. Where people on social assistance can afford necessities and where the Department of Social Development is well-staffed to support them and those experiencing mental health crisis. Where everyone has access to the justice system, not just the rich and the powerful. Where the Government has bold, green infrastructure projects that create good jobs in which workers are safe, protected and cared for if they suffer an injury. A province where schools are the heart of communities. Where people are thriving, not just surviving.

We can make this happen.  And all we need to do is to invest in people.

MAKING OUR GOVERNMENT WORK FOR EVERYONE

CUPE NB has recommendations to make our government work for the rest of us, not just the rich and powerful. These are concrete measures that would not only positively impact New Brunswick’s economy, but also set us up to become a more equitable community.

Every worker in New Brunswick deserves a living wage and a wage increase that goes above the rise in cost of living.

The minimum wage will increase to $13.75 in October, but it’s not nearly enough. In 2021, the living wage measures for New Brunswick varied between $17.50 (Bathurst) to $21.20 (Fredericton). What’s more, the cost of everyday items is skyrocketing. If you are a worker and your increase in wages from year to year does not match the cost of living, you are losing wages.

It’s in the government’s power to impact wages in a lot of ways. The province is one of the biggest employers in the province, so government can raise wages through bargaining with its employees. Government can raise the minimum wage. They can subsidize the wages for smaller not-for-profits that cannot afford increases in wages. They can offer grants and loans to small businesses.

We know that more money in workers’ pockets means more money in the local and provincial economy. Let’s raise the standard of living for all.

Ensuring access to universal, affordable childcare is critical for a feminist recovery. As a result of decades of advocacy from CUPE and other civil society groups, the Government of New Brunswick signed a $544 million agreement with the federal government in December 2021 to bring in $10 a day childcare by 2026.

CUPE members working in childcare across the country, supported by independent studies, know that childcare workers in private settings are paid lower wages. We know that they tend to not be unionized, and thus are more vulnerable to exploitation by their employers.

But for every public dollar invested in Early Childhood Education, there is a $6 return to the economy. So, let’s keep childcare public. We already have the infrastructure in schools, hospitals, colleges and universities to run childcare centres where people work. Let’s make universal, public, affordable childcare a reality in New Brunswick.

Why does one dollar of funding provide a $6 return? Governments who invest in the care economy see social and economic returns higher than what they put in, especially in child care. This is because funding for childcare costs increases the number of people who can access the labour force, especially women. It also improves provinces’ productivity, allowing governments to recuperate upfront costs. This is called the “multiplier effect”.

This Government has undertaken major reforms of our systems of government and service delivery. From municipal reform to healthcare reform to education reform, the Higgs government is determined to reshape the province. But the question remains: For whom?

There is a creeping privatization of our public services under this government already – FERO waste management, Medavie Blue Cross running ExtraMural home care and Ambulance NB, eVisitNB for virtual healthcare, and so many more. These are companies whose executives are being paid by public dollars that could be going to care for New Brunswickers. Medavie, a private company that now provides emergency medical services, is run by former Progressive Conservative NB Premier Bernard Lord. Friends helping friends get rich with public money.

The long-term care system in NB is a patchwork delivery system, with several for-profit players, the biggest one being Shannex. The spectrum of long-term care, which includes currently private community care services, needs an overhaul.

The services are overseen by the Department of Social Development but administered by private companies, which has led to many coordination issues during the COVID-19 health crisis and uncertainties on health and safety standards given all the different players involved. What’s more – these private companies are exempt from many transparency rules making it difficult to hold them accountable.

CUPE NB is advocating for accessible community care and long-term care services that are publicly funded and part of a universal health care service – like visiting a hospital or a family doctor. No more wait lists, no more recruitment and retention issues, no more downloading of responsibilities on overstretched smaller providers or full hospitals. Let’s make these essential services public and ensure dignity for our most vulnerable New Brunswickers.

According to the latest available data, New Brunswickers spend an average of $5,000 per year on electricity costs which is $720 more per year than the Canadian average, as New Brunswickers rely heavily on electricity for household use. Atlantic Canadians experience the highest levels of energy poverty in the country, spending the most on energy for household needs than anywhere else in Canada1. And the cost keeps climbing. New Brunswickers should not have to spend 23% of their annual income to heat and power their homes.

While NB Power raised the rates on New Brunswickers by 1.8% in 2021, they gave $100 million in energy subsidies to six pulp and paper mills over 10 years, three of which are owned by the Irvings. NB Power is considering another rate increase in 2022.

NB Power should be focused on keeping energy rates affordable. New Brunswickers should not have to choose between groceries or heating their home.

New Brunswick is amid a housing crisis made worse by the pandemic. Some 6000 people are on the waitlist for social housing, but the government’s plan is to build just over 100 new units a year. New Brunswickers across the province are being hit by extreme rent increases, but the government refuses to implement basic protections like rent control.

The Irving papers claim that the crisis is a result of population growth when in reality it is the unregulated movement of money not people that is the problem. Speculative investment companies with no interest in housing affordability are turning our housing market upside down to turn quick profits at the expense of New Brunswickers.

The solution to the housing crisis lies in building non-profit and cooperative housing, not more luxury apartments that nobody can afford. It lies in protecting the right to housing, and that means revamping the Residential Tenancies Act to strengthen protections for tenants.

We need a Government that will protect New Brunswickers, not predatory investment companies.

This winter, the Government of New Brunswick projected a $487.8 million surplus. This is not good news. This means that countless New Brunswickers have needlessly suffered during a pandemic – record levels of homelessness, low social assistance rates, long healthcare wait times, poverty-wages, and high energy costs all because of a Government that cannot properly budget.

But it is not just an inability to budget that is the problem. While everyday New Brunswickers diligently pay our fair share to keep our province running, the rich and the powerful get away with highway robbery.

Take the undervaluing of properties to reduce tax assessments, for example. The Irvings pay half as much in property taxes on their rail terminal in Saint John as the Tim Horton’s location across the street from it. Take the incessant corporate giveaways – $200 million in timber royalties given away to lumber companies. $15 million more to Shannex for nursing homes instead of keeping long term care public. $250,000 to a yacht club at the same time as demanding wage freezes from frontline workers.

This should be no surprise. Premier Higgs made a career out of making the Irvings rich. If they paid their taxes in New Brunswick instead of in Bermuda, we could keep our emergency rooms staffed, reduce wait times, and compensate frontline workers fairly.

Last fall, New Brunswickers stood together to fight for better wages for CUPE workers. For better public services. For a better New Brunswick. We saw what we can accomplish when we stand with each other, shoulder to shoulder. Let us stand together again, and demand better from this government. Let’s invest in our public services. Let’s strengthen our community colleges and protect our crown corporations. Public sector workers are doing their part – New Brunswick Liquor Corporations’ sales exceeded targets by $7 million. Let’s invest those revenues from NB Liquor and Cannabis NB into making New Brunswick work for everyone.

The money is there. Let’s invest in people.